The first week of 2023 exhibited minor volatility for the larger-cap crypto asset pair, Bitcoin and Ethereum, which returned 3% and 7.44% in weekly returns according to Coinglass data. Huobi (HT) and OKX (OKB) exchange tokens got underway to a great start between Monday and Wednesday before exhausting the momentum after the midweek action. NFT and metaverse tokens including ApeCoin (APE), The Sandbox (SAND), Decentraland (MANA) and Axis Infinity (AXS), on the other hand, staged a strong finish over the weekend.

Fresh gains across Monday’s trading have inspired a renewed northbound run in the crypto market which has duly carried on with a green theme. Here is a spotlight of the market and expectations this week.

Bitcoin bulls gets a grip on elusive target

Bitcoin (BTC) price momentarily got the better of the $17,000 mark late on Sunday after a three-week lull, before gaining more ground close to $17,500. The Monday positive action struck for the entirety of the digital assets sector as reflected in modest gains raked by the majority of alts. Ethereum’s native token, Ether, raced past $1,300 in similar fashion to Bitcoin setting a local high of $1,342, CoinMarketCap data shows. The Ether (ETH) token has since settled a few dollars below this yearly high at $1,320.

The latest hint of volatility has also spawned profits in many mid-cap alts whose prices are looking up. BNB (BNB) coin has strengthened 11% since last Monday to around $273 where it was trading at writing. Cardano (ADA) and Solana (SOL) have stood out among the remaining pack, more so the latter which added impressive gains to its price last week. The two tokens enjoyed massive price leaps relative to the broader crypto market coming off the weekend. 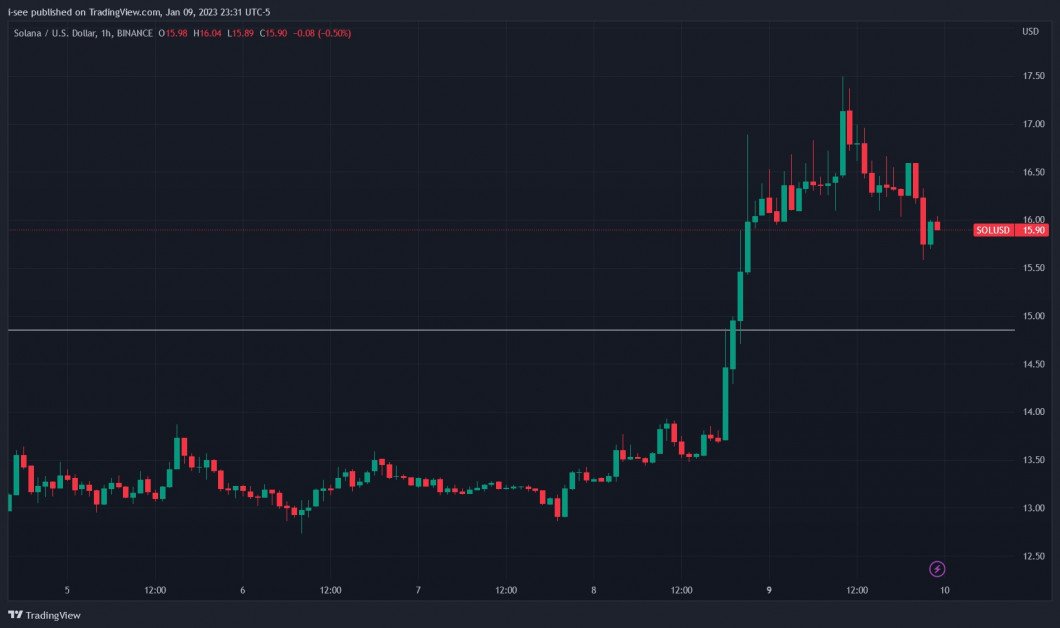 Profit-taking has since kicked off, leading to slight retracement from respective highs of $0.336 and $17.36. Still, Solana holders have conserved the cheer that saw its token price jump 35.60% in the just-concluded week. The SOL token is trading at $15.95 at the time of writing – a welcomed leg up from marginally above $8 on Dec 29. The climb past the $14.80 resistance line comes amid swollen transactional activity attributable to the recently launched Bonk (BONK) token. The number of daily active Solana addresses spiked last week only tapering off during the weekend according to data from Artemis. Last Friday’s over 678,000 active addresses recorded represent the metric’s highest figure in more than twelve weeks since Dec 13. 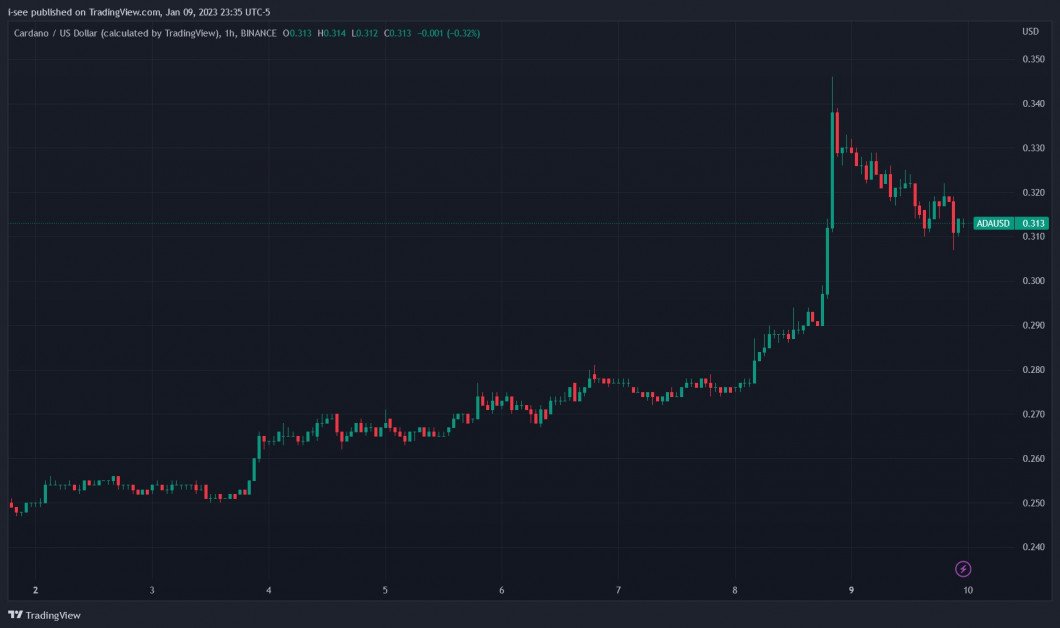 Cardano’s ADA coin has equally given up part of its double-digit profit from Sunday in its dip from $0.336 at the peak of the rally to $0.315. The Cardano ecosystem separately enjoyed a good week especially towards the end. On chain data as of Monday confirms significant traction across its non-fungible (NFT) marketplaces and Decentralized Finance (DeFi) protocols including the top DEX SundaeSwap.

Aptos (APT) has soared by 26% on Monday, reaching a multi-month high of $5.49 hours ago. Gala (GALA) is also trading well in the green, up 22% in the last 24 hours to $0.0427 where the GALA/USD pair was spotted trading. Gala Games, the blockchain gaming ecosystem behind the project, has been exploring opportunities outside gaming through its film unit. The Gala Games team disclosed earlier this week that its ongoing projects with Hollywood stars Dwayne Johnson and Mark Wahlberg will feature digital items that interested users can cop using the GALA token. The gaming entity has also acquired Ember Entertainment according to an update shared a few hours ago.

Zilliqa (ZIL)and Chiliz (CHZ) follow closely on the list of tokens charting a notable uptrend with 6.77% and 5.32% respectively. Other alts that have seemingly successfully tackled key barriers on their charts and transitioned out of stagnation zones are Polygon (MATIC), Litecoin (LTC), Polkadot (DOT) and XRP (XRP).  Ripple Labs, the blockchain associated with the XRP offering, recently communicated that it is confident in the conclusion of the ongoing case with the US Securities Exchange Commission by the second half of the year.

The week ahead for crypto

The FTX debacle is still top among headlines to watch out for this week although new influences, that could define the course of the market depending on reaction from traders, are set to enter. A sustained breach above the newly reclaimed level is crucial for Bitcoin’s positive returns this month, considering a macro-acting factor in the form of US inflation data to be released on Jan 12 (Thursday) at 8:30 am ET. The December Labor Department’s CPI report holds even more significance as it precedes the Federal Reserve’s Jan. 31-Feb. 1 meeting centered around interest rates and other policies. Analysts reckon that the Fed will settle on a 25 basis-point (4.5%-4.75% percentage point for the extreme scenario) increase in the benchmark rate. In the market, anticipated profit-taking as prices cool off could bring on selling pressure leading to minor corrections in the short-term.