Bears may have been left in shock after Bitcoin [BTC] powered through doubts and rose above $18,000 to continue its excellent new year performance.

The coin, which has enjoyed a consistent uptick for about a week, produced a 4.05% increase to achieve the milestone. According to CoinMarketCap, the trading volume in the last 24 hours followed through with a rise above $23 billion.

Is your portfolio green? Check out the BTC Profit Calculator

All thanks to the huge input

Glassnode’s data established that the feat might have been inconceivable without the series of considerable accumulation since BTC traded around $16,500. The on-chain analytic platform noted that the acquisition continued until the price reached $18,200.

This was confirmed by the position of the supply in profit percentage.

This has helped return 13% of the coin’s circulation supply into gains. Note that the metric measures the percentage of the total supply held in profit. The information from the supply in profit showed that the 10.3% rally ensured that 60.5% of holders who bought around $16,500 made gains.

As #Bitcoin rallies to $18.2k, over 13% of the Circulating Supply has returned to profit.

The observed sharp move upwards in this metric helps to confirm that a large volume of $BTC was acquired between $16.5k and $18.2k.https://t.co/yflZloDbSP pic.twitter.com/J8egLvYt3w

Prior to the bullish move, the supply in profit percentage was in line to form a bearish divergence. This was in contrast to the 48% that were in losses between November 2022 and the first day of January 2023.

Following the development, Bitcoin’s social metrics pushed towards impressive levels. According to Santiment, social dominance fell to 8.77% on 6 January but revived to 14.74% at press time.

Similarly, the social volume accompanied the trend with a move to 8706. However, the volume had decreased to 2379 at the time of writing. This meant that BTC had gathered a significant share of discussions around the crypto community. However, the volume dip implied a reduced search for the coin.

Wrong move betting against the king

The move was followed by a further exit away from the extreme fear side of the market, as displayed by the Bitcoin fear and greed index. At press time, the index glanced slightly towards the neutral position at 30.

Furthermore, Bitcoin could also drive the rest of the market into the green. Unfortunately, this was to the detriment of shorts, which accounted for a large part of the last 24 hours’ liquidations.

Realistic or not, here’s BTC market cap in ETH’s terms

According to Coinglass, the market wiped out over $245 million within the said period. Enthusiasm rose in the crypto community as several analysts opined that the bull market was around the corner.

The #BullRun is just around the corner!#Bitcoin

But can BTC hit $20,000 in the short term? Indications from the Directional Movement Index (DMI) suggested that BTC could rise further despite the retracement to $18,100. This was because the positive DMI (green) was high at 40.12.

However, a push toward $20,000 could be challenging to reach due to the trend of the Average Directional Index (ADX). The ADX (yellow) would have supported the possibility if it was at 25 or above. Instead, it stayed put at 21.36. 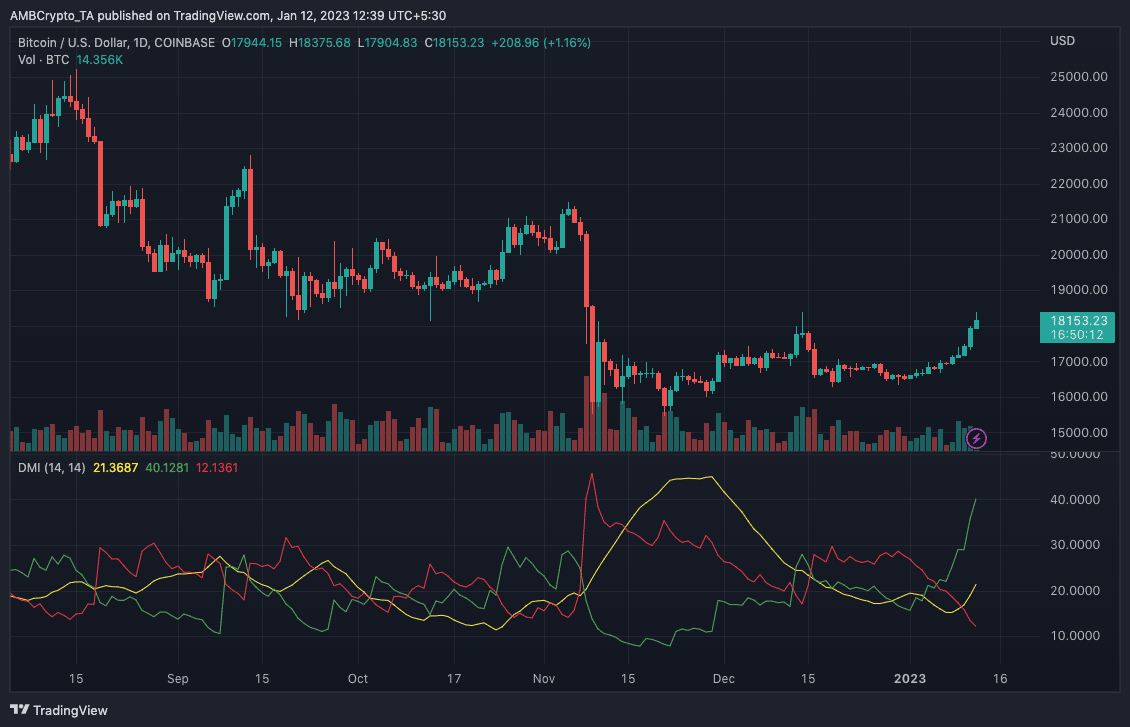